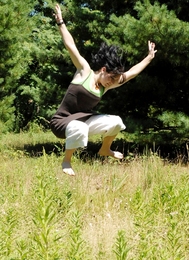 BECKY RADWAY has had the pleasure of performing professionally with the Kevin Wynn Collection, Heidi Latsky Dance, Ezra Caldwell, Incidents Physical Theater, MariaColacoDance, and Leanne Schmidt and Company. She received her BA from Goucher College in Baltimore, MD, and has worked primarily in arts administration since 2002. Radway was a finalist for the Arts Management Fellowship program at The Kennedy Center for the Performing Arts in Washington, D.C., and is currently the Operations Manager at Triskelion Arts in Brooklyn, NY. Radway is currently working on a trio of dance-horror films with fat pigeon (alongside Carlton Ward and Joel Garland). Their first installment, 219 Gates, was released in late 2013 and won a Claw Award for Best Editing at the 2014 Terror Film Festival (Philadelphia, PA).