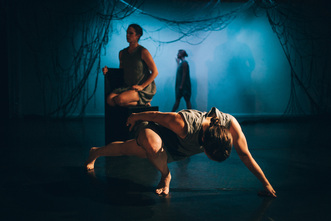 BECKY RADWAY DANCE PROJECTS (BRDP) is a modern dance company founded in 2002 in New York City with the goal to create innovative movement and powerful imagery through original dance works. The company presents vibrant performances with a goal to establish unique environments with each new production that deliver an overall visceral and aesthetic experience.

Artistic Director Becky Radway’s rich choreography, described as “quirky and enjoyable” by The Dance Enthusiast and “profoundly interesting” by iDanz Critix Corner, delights audiences with quick, detailed phrases, intimate partnering, and engaging themes. Throughout the years, the company has collaborated with Philadelphia-based composer, Scott Radway, on a number of celebrated original scores, and with NYC-based designers, Elisabeth Svenningsen and Paul Olmer, on beautifully intricate set elements.

​ As a performer, Radway has had the pleasure of working professionally with the Kevin Wynn Collection, Heidi Latsky Dance, Ezra Caldwell, Incidents Physical Theater, MariaColacoDance, and Leanne Schmidt and Company. She holds a BA in Dance Performance and Choreography from Goucher College in Baltimore, MD, and has worked primarily in arts administration since 2002. Radway was a finalist for the Arts Management Fellowship program at The Kennedy Center for the Performing Arts in Washington, D.C.

BRDP is honored to have worked with a brilliant collection of performers throughout the years. These talented artists include: